A range of geological forces produced New Zealand’s distinctive landforms over millions of years. From around 85 million years ago, the island’s that comprise New Zealand split away from the supercontinent Gondwana through continental drift. For roughly the last 55 million years, Australia, located 2000 kilometres away across the Tasman Sea, has been the nearest landmass. Due to separation from the rest of the world and a lack of humans until recent times, the flora and fauna of New Zealand evolved into unique endemic species, creating a world of birds.

Tectonics, ice, fire, and water. These powerful forces are shaping and reshaping this young land as it emerges out of the ocean. These elements are also at the heart of New Zealand’s national parks. The pressure released by continental shelves colliding creates the fissures for volcanoes to escape and pounamu to be formed. Rain and snow create the glaciers that carve out the mountains. Ocean wave pound limestone cliffs to form caves and blowholes. Nature’s forces are making this land.

Zealandia, also called the New Zealand continent or Tasmantis, is an almost submerged mass of continental crust. The continent separated from Antarctica 85-130 million years ago. It then separated from Australia 60–85 million years ago and sank beneath the ocean. The land mass may have been completely submerged about 23 million years ago. Today 93% remains still submerged beneath the Pacific Ocean. New Zealand had a flora characteristic of Gondwana before it broke away from the super-continent. Species of Beech tree date back to Gondwana. Dinosaurs ruled the land at the time New Zealand split away from Gondwana, early mammals were evolving but had not yet established themselves on the land that would become New Zealand. New Zealand’s only native land mammals are bats (two small species) whose ancestors could fly here after the split. But as New Zealand drifted away from Gondwana birds, tuatara, earthworms, centipedes, millipedes, skinks, geckos, spiders, weevils, slugs, snails, and weta all came too. Some flew over before the distance between New Zealand and Gondwana was too large and others drifted across on rafts of floating vegetation. MOA: The Moa was the largest bird that ever lived. There were nine species in all ranging from the smaller upland moa to the giant moa. Without natural predators, Moa evolved to become flightless forest browsing birds. When people arrived Moa were a primary source food, with the bird being hunted to extinction in the last 300-400 years. From skeletons like this and other remains we know moa had reddish brown feathers and large powerful feet. Its long neck allowed it to reach tall vegetation. 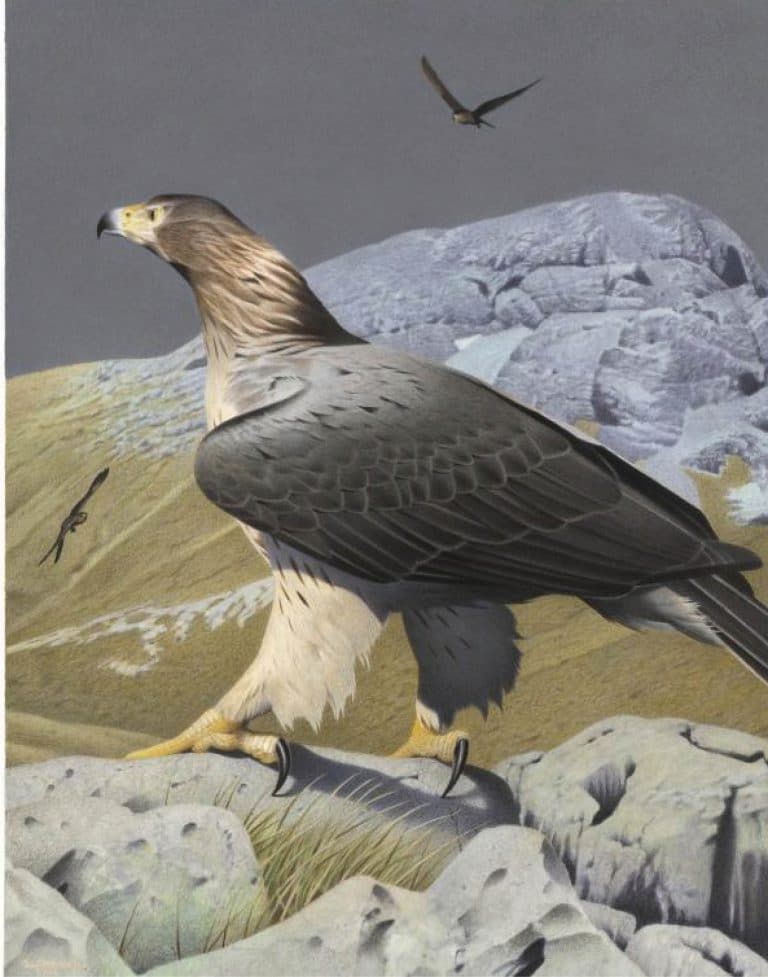 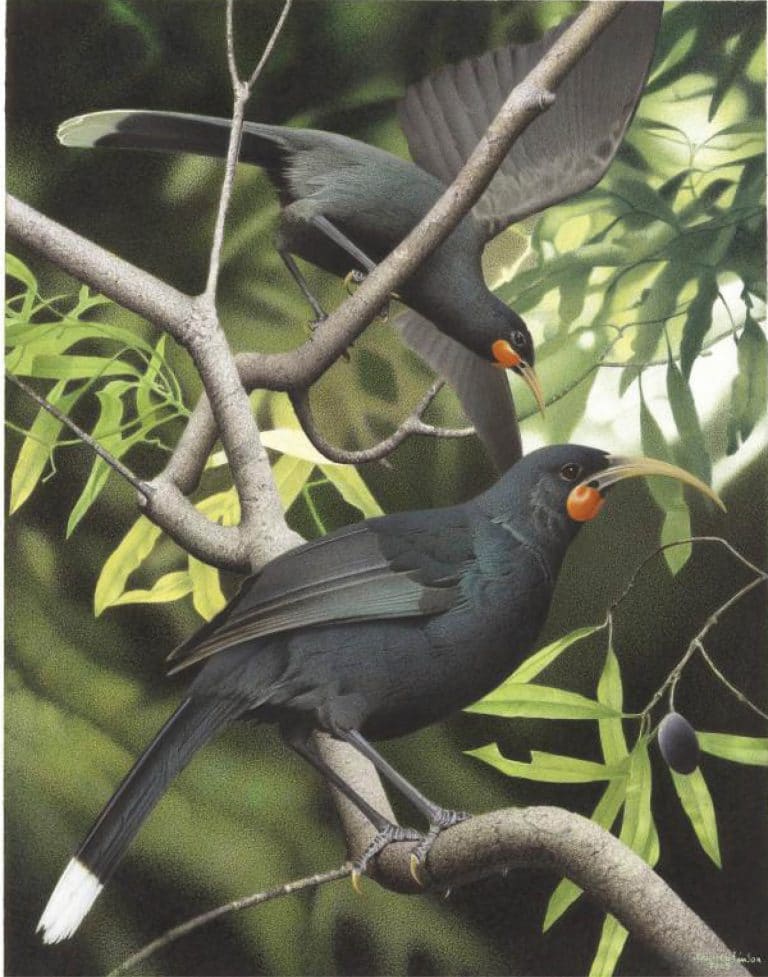 HUIA: The Huia is an extinct species of wattlebird native to New Zealand. The Huia was renowned for its song and sexual dimorphism. Maori used Huia feathers to adorn items of clothing belonging to individuals of high status. Europeans hunted the bird to collect specimens, a practice which eventually resulted in its extinction. The last sighting of the Huia was in 1907.

For Maori, the forest is the place of Tane, the god of the forest. The trees of the forest separate the sky and the earth and makes space for Tane. The rata tree begins its life as an epiphyte that uses its vine-like form to colonise other trees by wrapping its branches around its host. The 2500 year old kauri tree, Tane Mahuta, is a living embodiment of this god. New Zealand’s primeval hardwoods have also been of great use to people. The 30 metre high totara tree has been used by Maori to make waka taua, a giant canoe capable of carrying up to 100 people. Settlers milled these trees to build their houses, bridges, and other structures.

TOTARA: Totara is a tree endemic to New Zealand, growing in low lying areas as well as sub-alpine landscapes. Totara have traditionally been used by Maori for carving and waka building as they have hard wood that is straight grained and very resistant to rot. 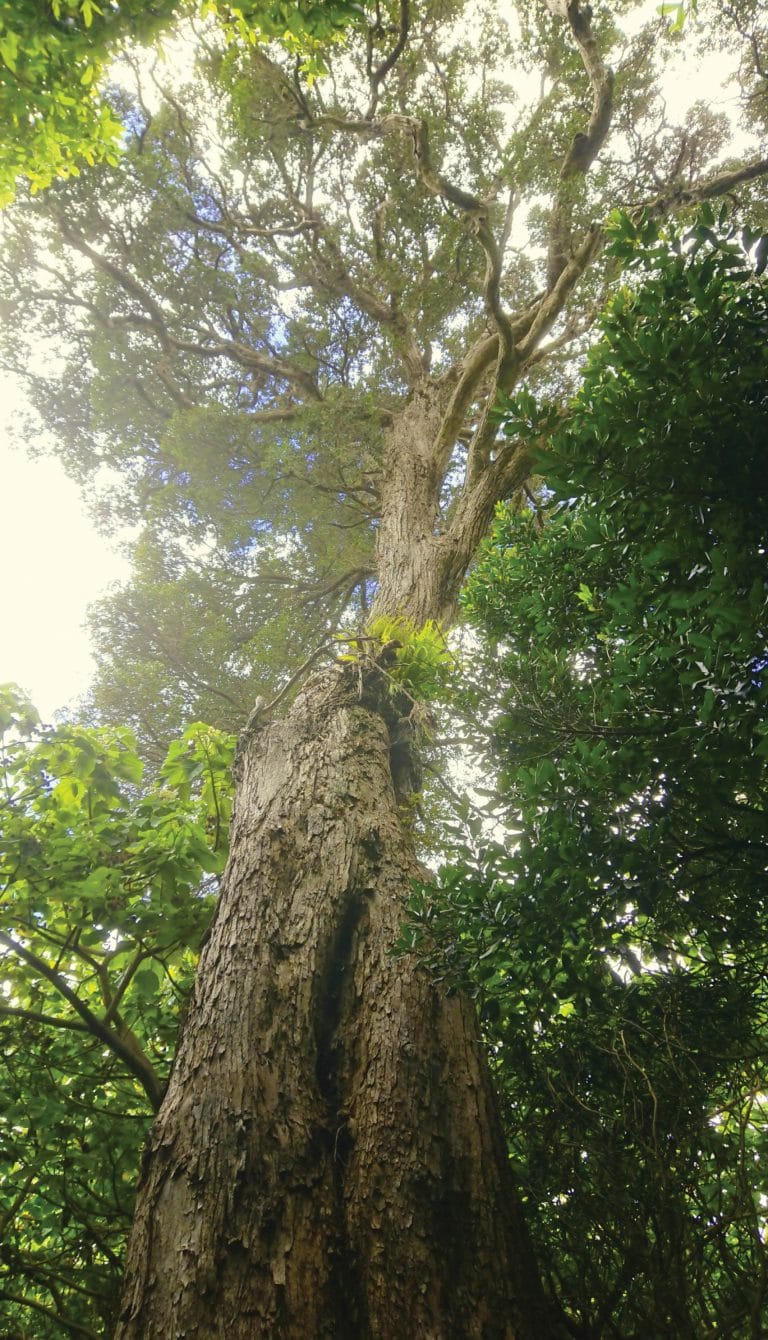 RATA: Rata is tree of between 15-25 meters in height with lots of twisting branches that is found in forests across the Pacific. They are best loved for their beautiful red flowers. Rata are under threat from possums, which browse on the trees, often causing them to die. 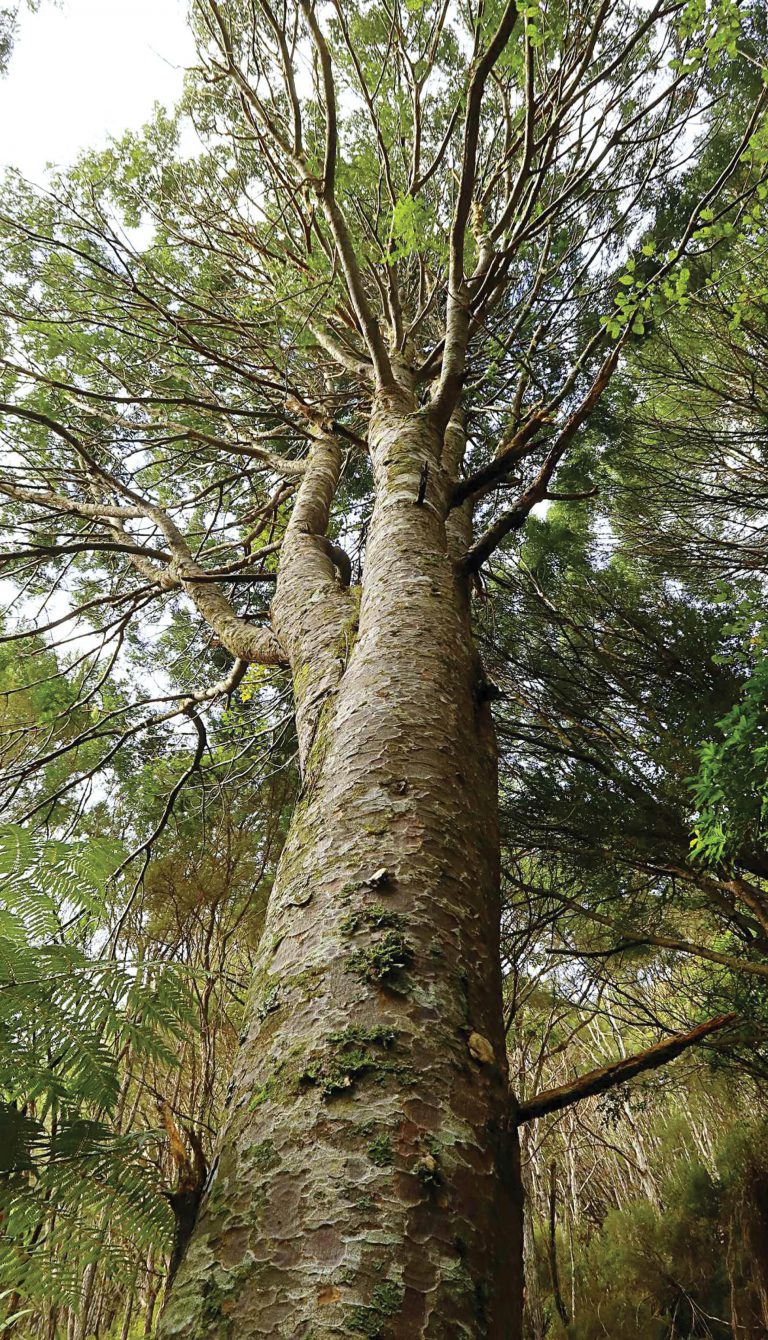 MATAI: Matai is an endemic New Zealand coniferous tree that grows on the North Island and South Island. 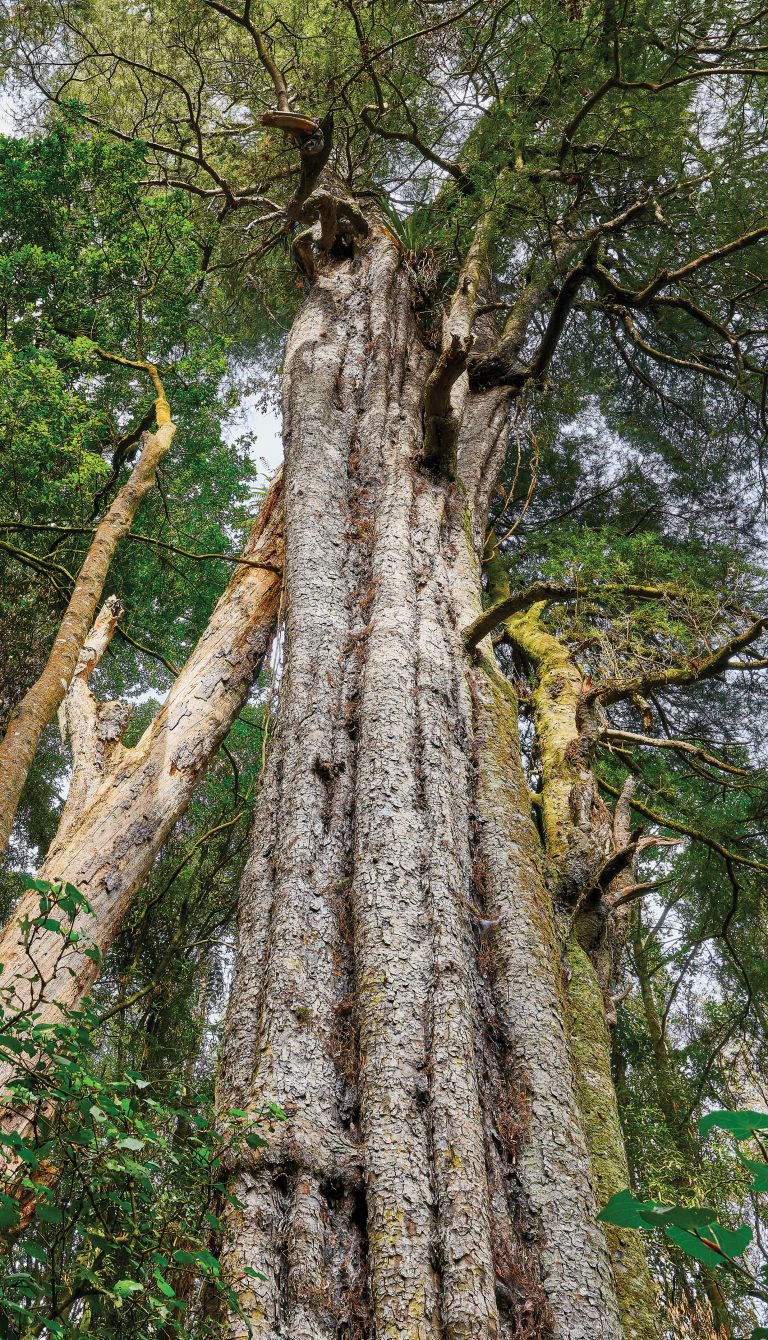 RIMU: Rimu is a large coniferous evergreen tree endemic to New Zealand forests. Rimu can grow up to 50 meters in height and 1.5 meters over their 800-900 year lifespan. Rimu was a main source of timber in New Zealand but its use for forestry has now been banned on public land and greatly limited on private land.

A WORLD OF BIRDS

New Zealand’s forests, mountains, and coasts are home to some of the world’s rarest birds. Isolation meant these birds developed in a world with few predators such that many no longer needed flight as a form of escape. Instead they grew large and plenty on the land. The 1500kg giant moa was the largest bird of them all, grazing the forest undergrowth. However today those native birds that remain many are threatened by introduced predators and require protection. For New Zealanders caring for our rarest animals focus us on our shared values based on kaitaiakitanga or guardianship and conservation. At the exhibition people could discover some of these species and listen to their calls on the bird wall. 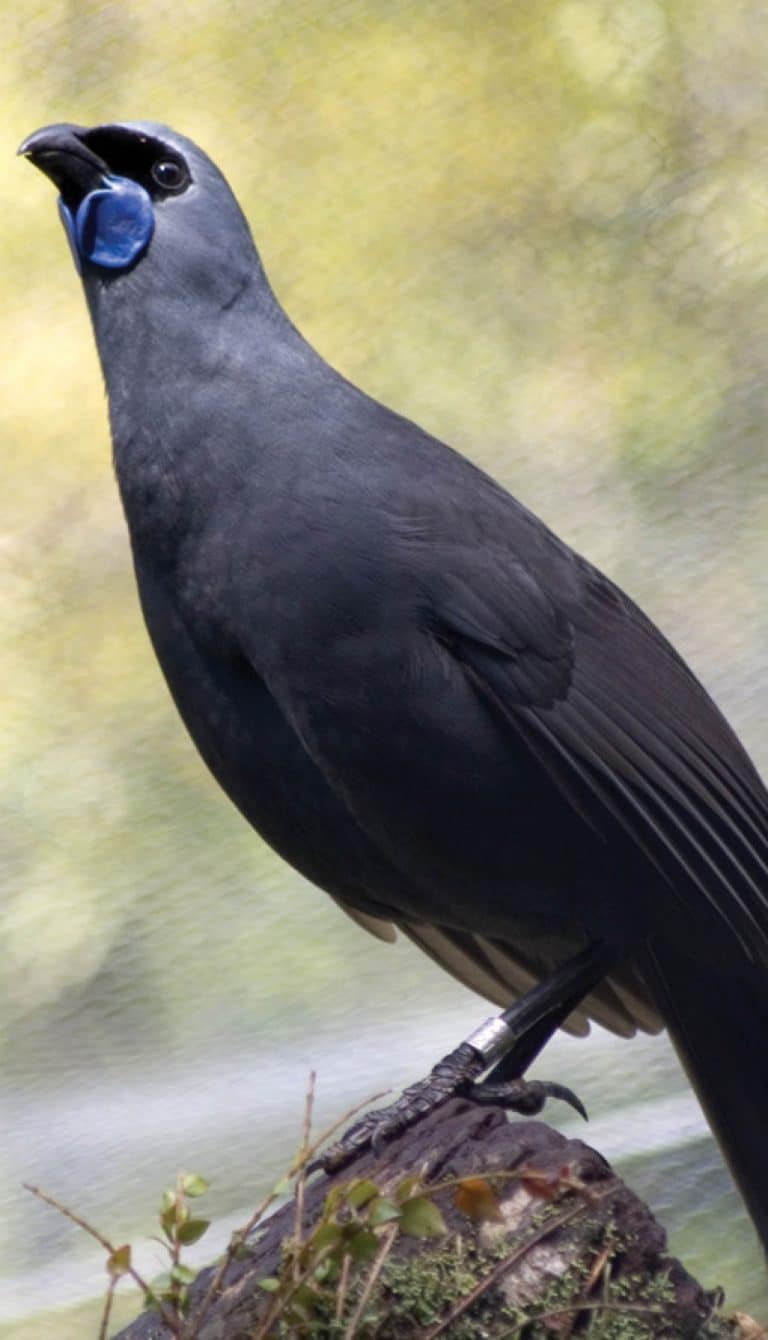 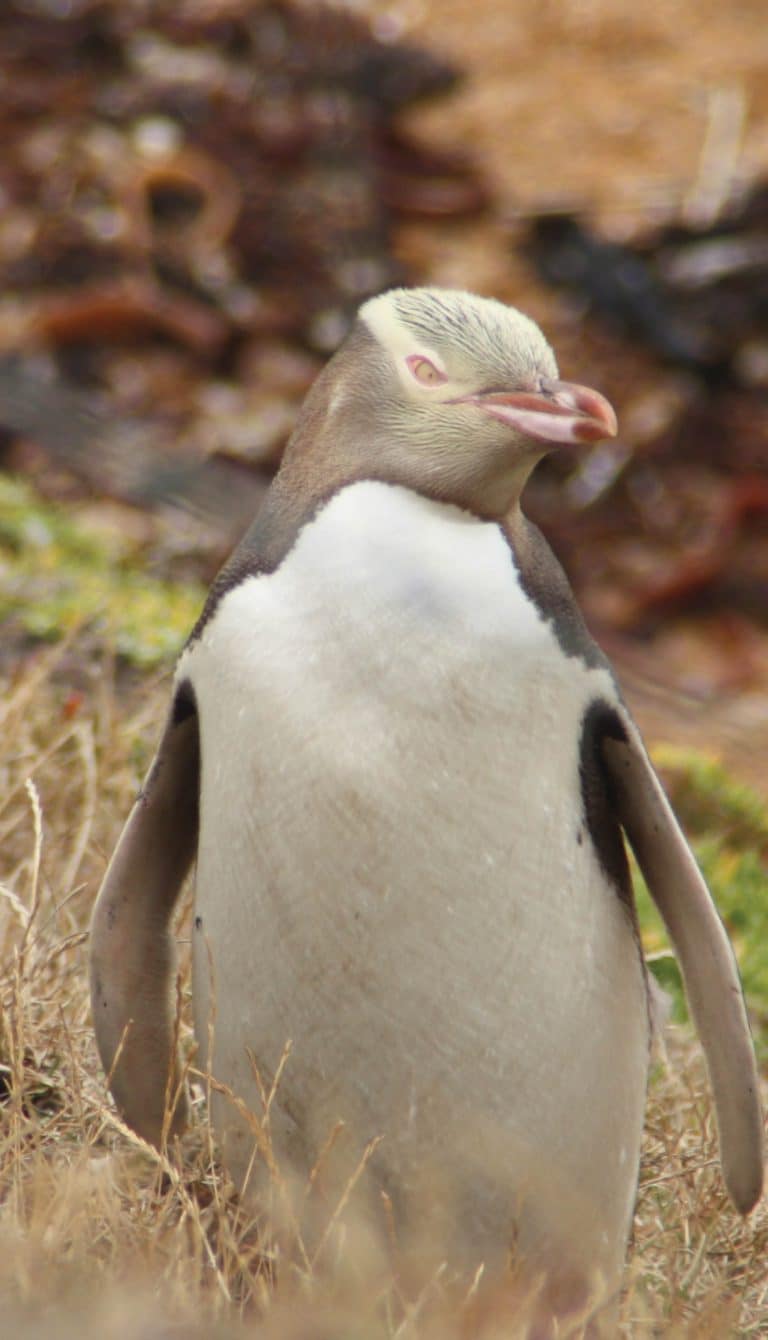 HOIHO: The yellow-eyed penguin or hoiho is one of the world’s most ancient penguins. The penguin breeds along the eastern and south-eastern coasts of New Zealand as well as some outlying islands. It is a threatened species with only 4000 individuals remaining.

TUI: The tui is an endemic passerine bird of New Zealand. It is renowned for its call and beauty. It has black feathers, a multicolor iridescent sheen that varies with light and angle on its back and tail, and a small white collar. 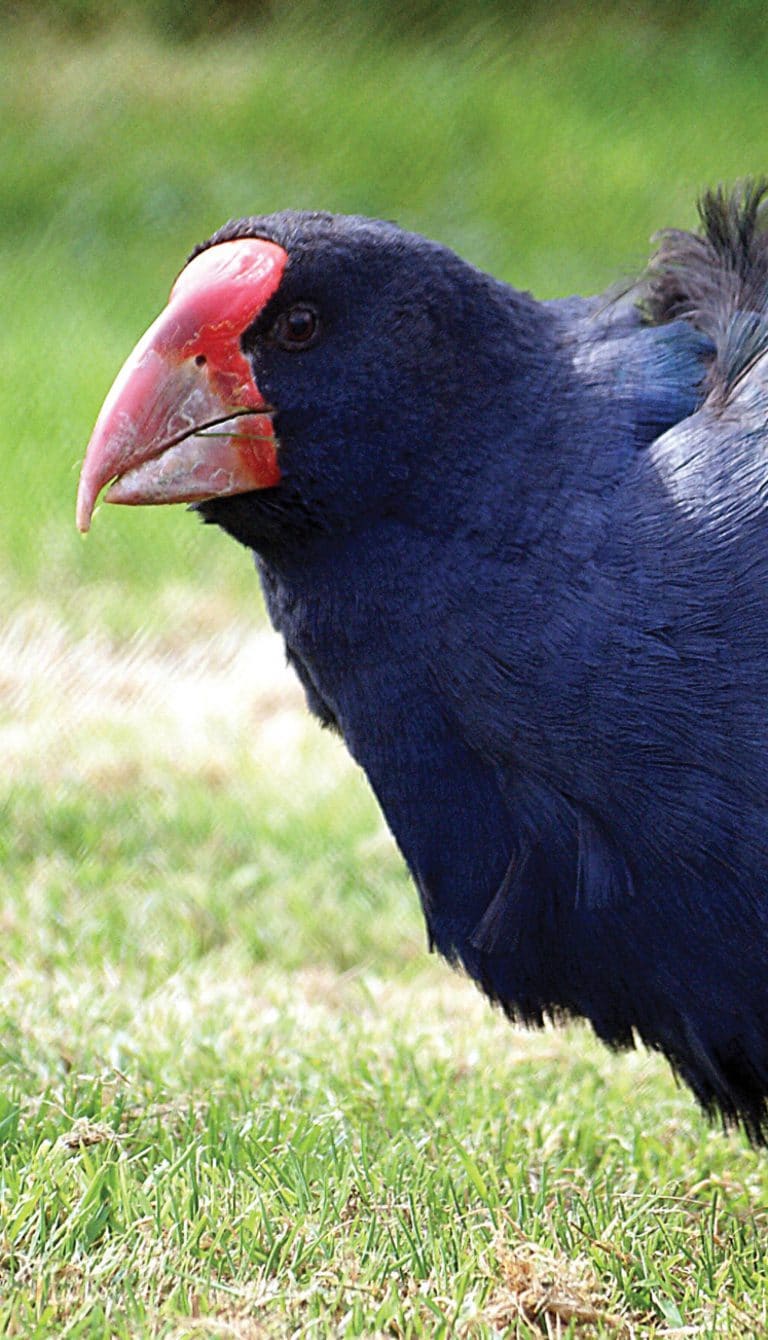 TAKAHE: The takahe is a flightless bird native to New Zealand. The takahe is greatly threatened by introduced predators and for a time when sightings stopped occurring it was considered extinct.

New Zealand was the last major landmass in the world to be settled. Maori became the first inhabitants of New Zealand in the thirteenth century. They had a significant impact on the land, introducing new species and hunting existing ones into extinction. Europeans did not visit New Zealand until the seventeenth century and did not settle in large numbers until the nineteenth century. Due to their numbers and technology, Europeans had a greater impact on New Zealand’s environment. They drastically reduced the amount of forest and altered ecosystems through terra-forming processes and species introductions.

Sometime during the thirteenth century, Polynesians, who had originated in China, travelled to Aotearoa (New Zealand) or ‘the land of the long white cloud’ via several waves of canoe voyages. It is believed Kupe is the navigator responsible for making the first successful human migration to Aotearoa. Māori introduced new species, including dogs and rats, which along with humans were the first flightless land mammals to arrive in Aotearoa. Māori also hunted indigenous birds like Moa into extinction.

KENNETT WATKINS – THE LEGEND OF THE VOYAGE TO NEW ZEALAND (1912): Kennett Watkin’s 1912 painting is an artist’s depiction of Māori arrival to Aotearoa in the thirteenth century.

THOMAS SELBY COUSINS – MAORI ROCK DRAWINGS IN WEKA PASS, NORTH CANTERBURY, 1876: This painting shows a group of Māori in front of a limestone shelter in the Weka Pass area of North Canterbury. Under the natural overhang of the shelter are drawings of several canoes and fish. A large proportion of Maori rock art was produced on limestone shelters like this one. 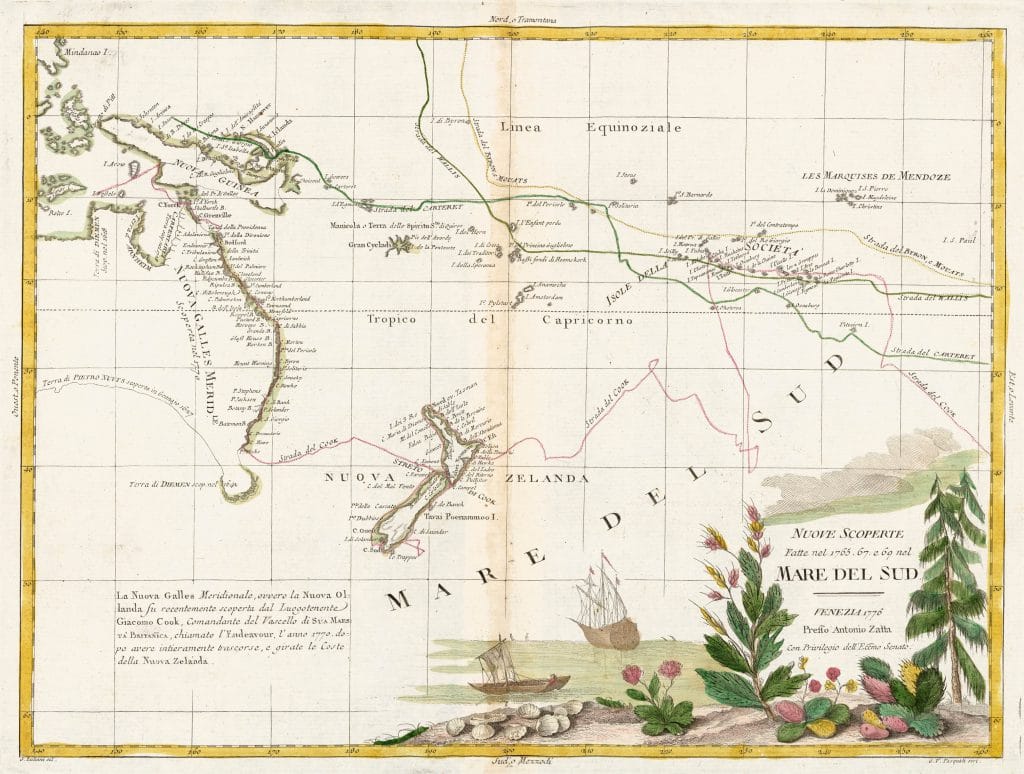 The first European to sight New Zealand was Abel Tasman in 1642. In 1769 Captain James Cook became the first European to make landfall and formally claimed New Zealand as a British territory. During the eighteenth century other explorers, sealers, and whalers began to explore New Zealand. In the middle of the nineteenth century a planned process of British settlement brought many immigrants. They used technology to drain wetlands and clear forests. In their place they recreated the farmlands of their homeland, filling them with the plants and animals they brought with them. 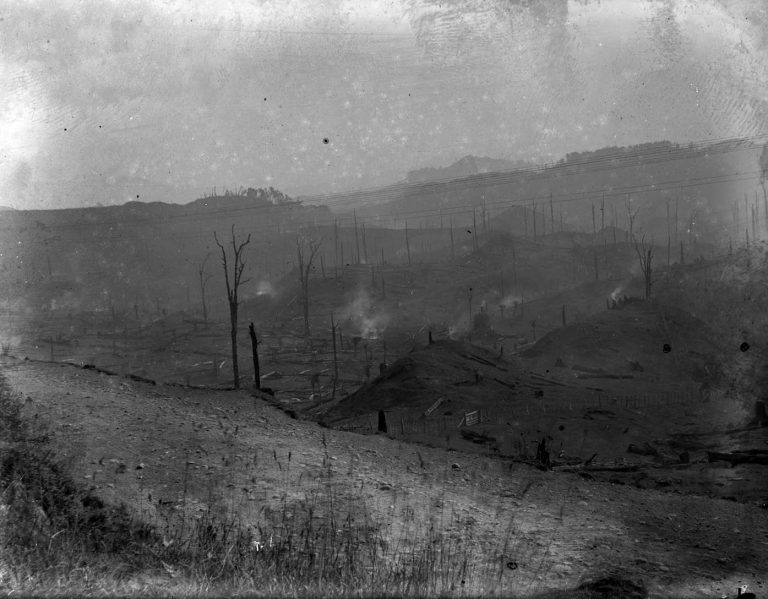 PEBBLE THOMSON – A LANDSCAPE CLEARED OF TREES, NOT DATED: The scale and completeness of forest destruction that took place in the nineteenth century was unprecedented. In the 1880’s alone 14% of the country’s entire land area was converted from forest to farm. 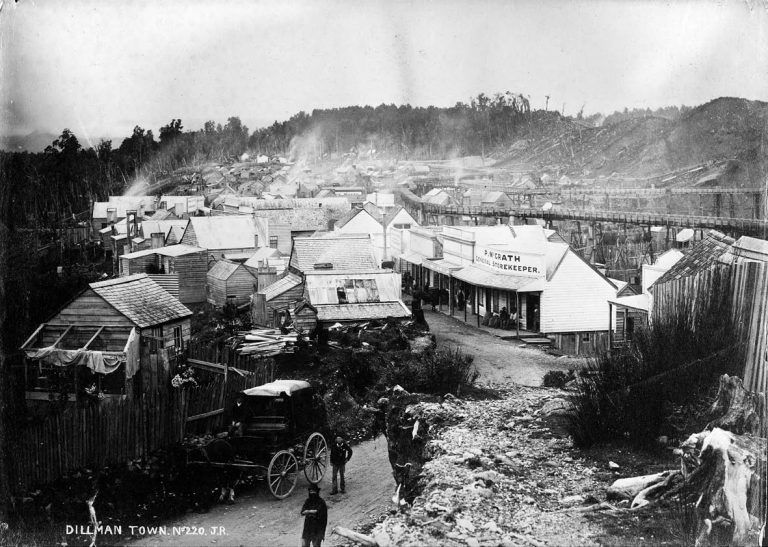 RECENT ERUPTIONS: Dillmanstown was a typical booming West Coast town that quickly sprung up due to the advent of mining.

Before people arrived, 80% of New Zealand was covered in forest. The first forest clearings occurred naturally from fire caused by lightning strikes and volcanic eruptions. Māori lit forest fires to hunt Moa, and to clear land for crop planting. Radiocarbon dating shows that up to 40% of New Zealand’s forest cover was burnt in the first 200 years of Māori arrival to the country. Europeans burnt massive areas of forest to make way for farmland and to supply timber for building. In one decade alone 14% of New Zealand’s forests were consumed. Currently only 20% of the country is still covered by native forest.

At least 45 species of indigenous bird have become extinct since the arrival of humans to New Zealand. In the case of Moa species, these birds were wiped out by Māori who hunted them. When Europeans came to New Zealand they brought mammals like stoats and possums with them which quickly became pests and predated the flightless native birds, usually by eating their eggs. SOUTH ISLAND ADZEBILL: The South Island Adzebill was a large flightless bird weighing up to 18kg, which became extinct due to human predation sometime after the arrival of Polynesians to New Zealand in the thirteenth century. FORBES’ HARRIER: The Forbe’s Harrier was a giant bird of prey with a wingspan of up to 2m. The harrier hunted other birds and probably became extinct shortly after its main food source, the moa, died out. 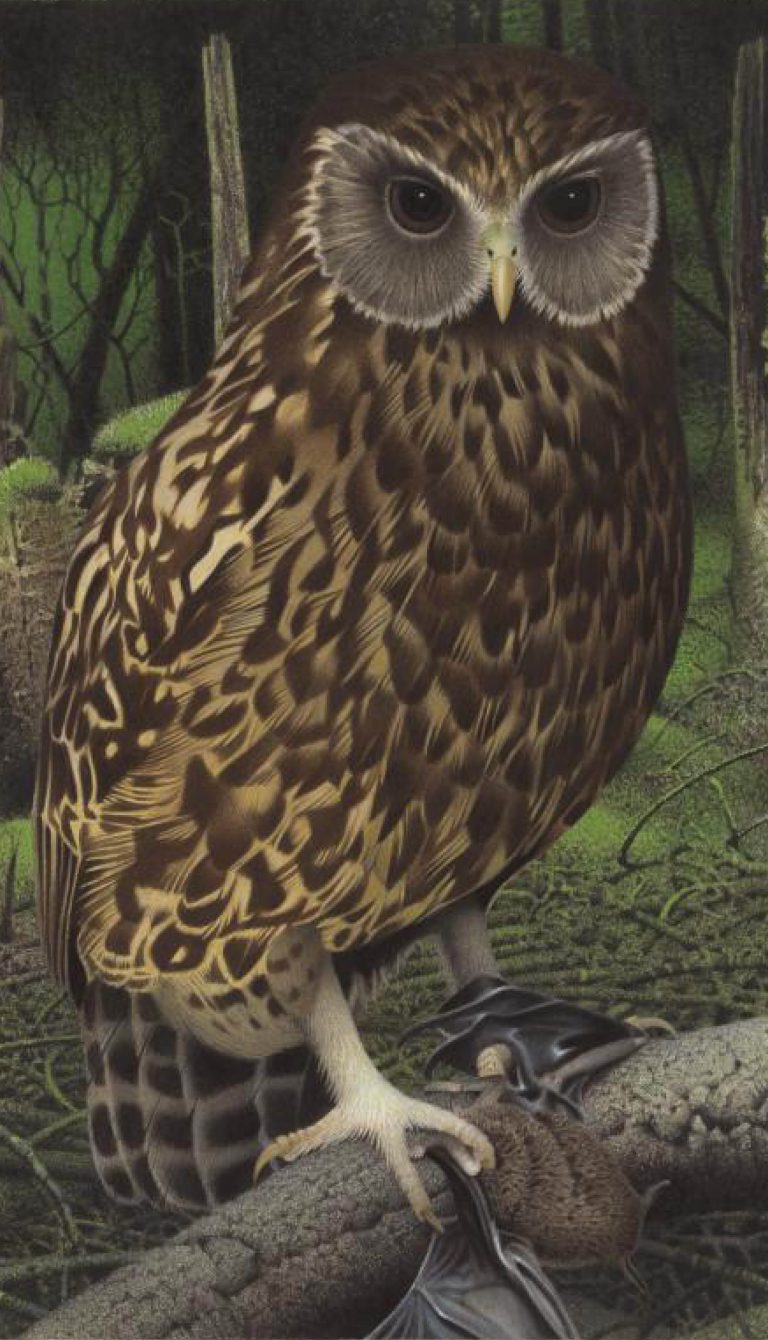 LAUGHING OWL: The Laughing Owl was one of New Zealand’s two indigenous owl species. It was known for its strange call described as sounding like the bark of a young dog.

BUSH WREN / MATUH: The Bush Wren or Matuh was a very small, almost flightless bird found across New Zealand. The Bush Wren is now considered extinct as the last authenticated sighting was in 1918.