The Department of Conservation is the government organization mandated to manage New Zealand’s protected areas in accordance with the Conservation Act. In effect the department’s staff are the heroes of our natural places, who spend their days maintaining facilities and caring for our important plant and animals species.
START EXPLORING
Menu

The PROTECTED AREAS OF NEW ZEALAND

The Department of Conservation (DOC) manages a range of protected areas including national parks, conservation parks, scenic reserves, scientific reserves and stewardship lands, as well as marine reserves. Together these sites cover more than 33% of New Zealand’s land area. 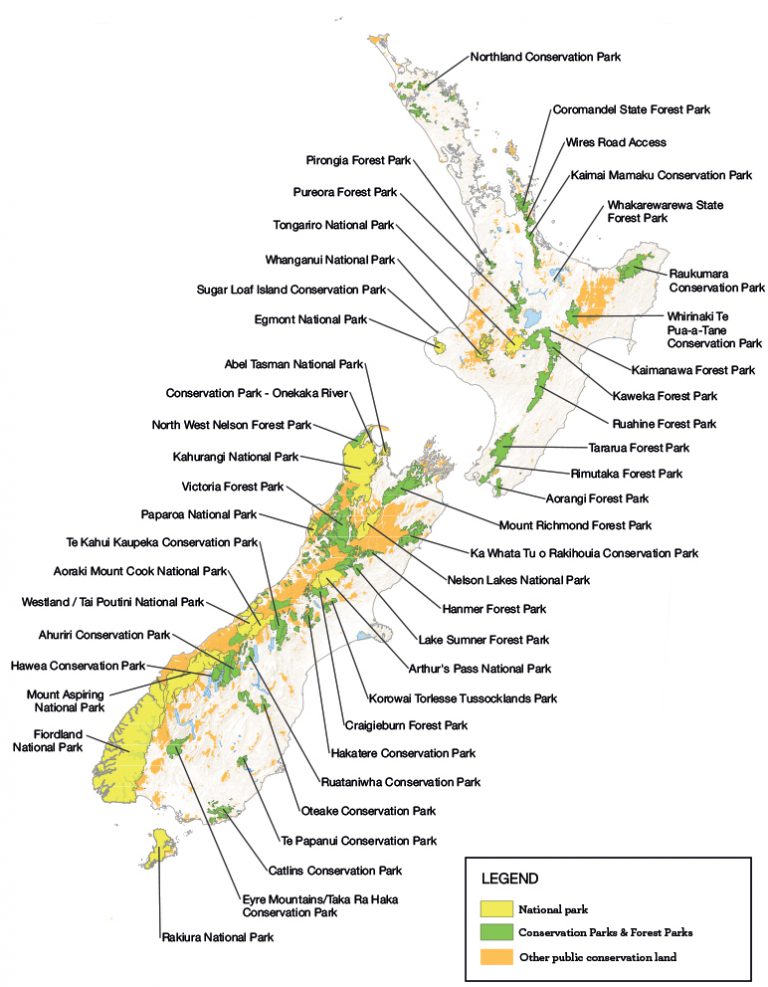 The National Parks Act 1980, which was approved by the government of the day, and remains in force until it is changed, codifies the selection, purpose, and governance of the national parks of New Zealand. The Act defines national parks as places of distinctive scenery, ecological systems, natural features, and scientific importance. The Act declares that national parks will be preserved in perpetuity and will be free for the public to enter. 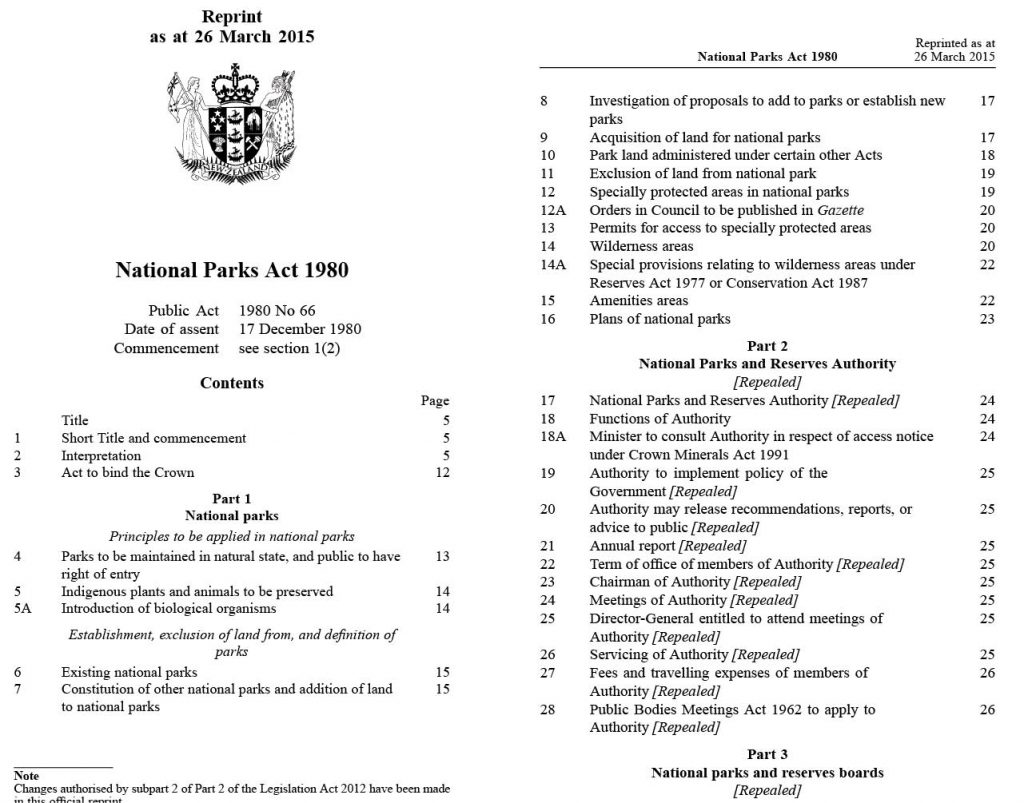 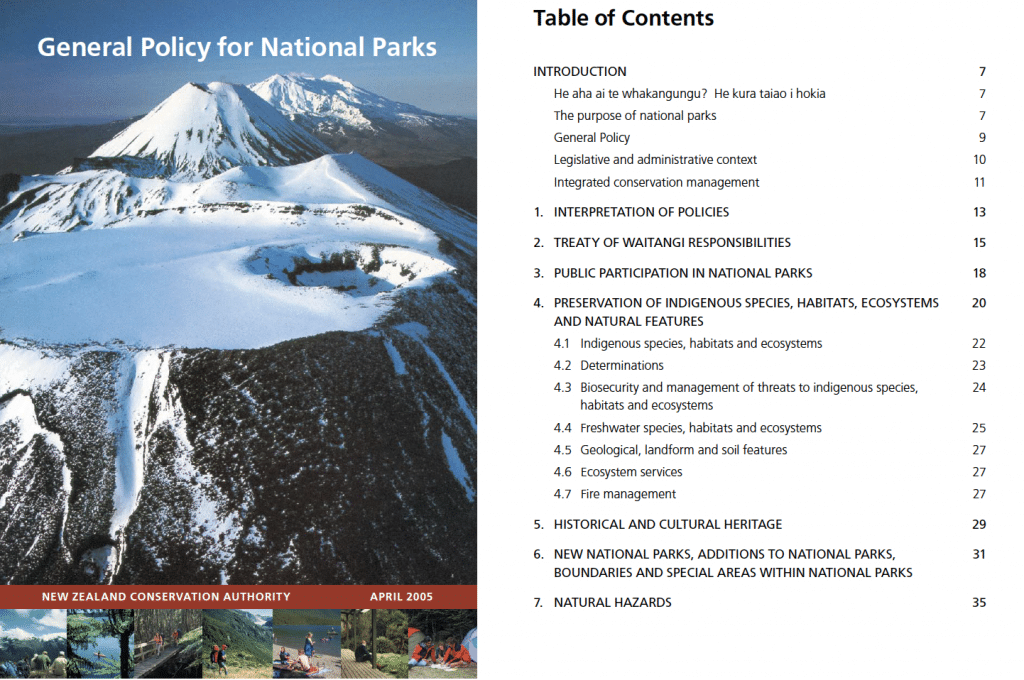 Each Conservation Management Strategy provides an overview of conservation issues and directs the management of public conservation lands and waters within one region of New Zealand. Their purpose is to establish objectives for the integrated management of natural and historic resources, as well as recreation and tourism. These strategies are set by the local conservation board. 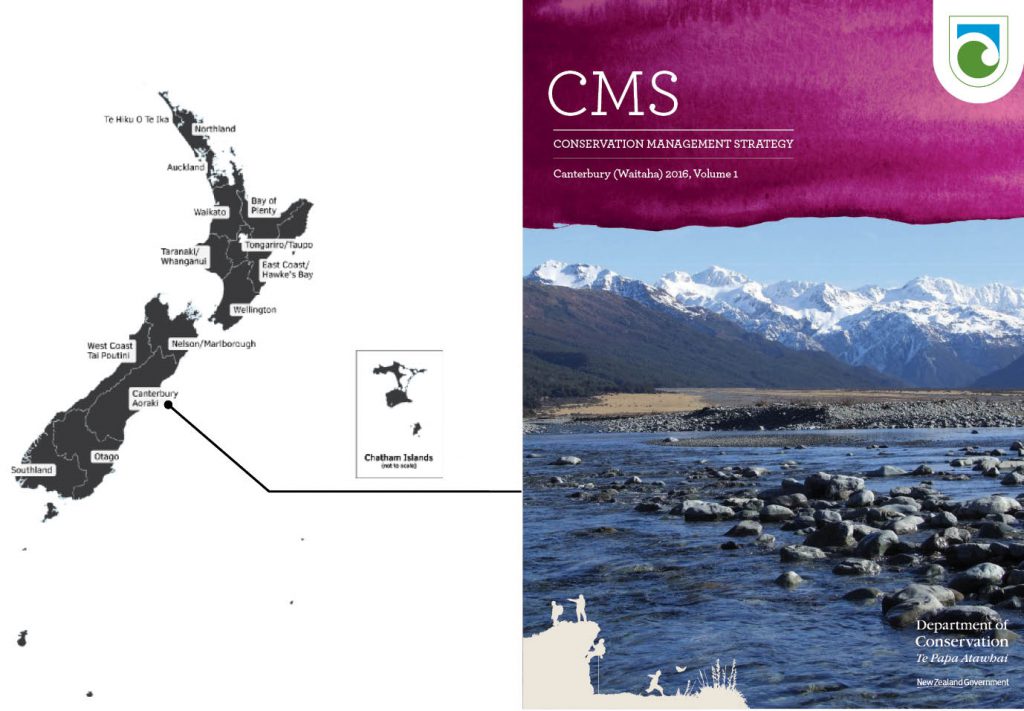 Each national park of New Zealand has a National Park Management Plan. These are 10-year plans that each provides specific management objectives for individual parks. The purpose of the plans is to ensure that parks are being managed in accordance with the National Park Act and the General Policy for National Parks. New Zealand’s government consists of a parliament made up of a House of Representatives. The House of Representatives is made up of 120 members of parliament who have been elected by the public. The parties in power appoint some members of parliament as ministers responsible for different areas of governance. The Minister of Conservation is responsible for all governance tasks related to conservation, including protected areas. Campsites are located across New Zealand. Campsites can be basic or serviced. They may have few services or contain facilities like showers and full cooking facilities. Campsites are open to members of the public who pay per night to stay in the tents, caravans, or campervans, which they bring with them.

THE KEY OUTCOMES OF THE DEPARTMENT OF CONSERVATION 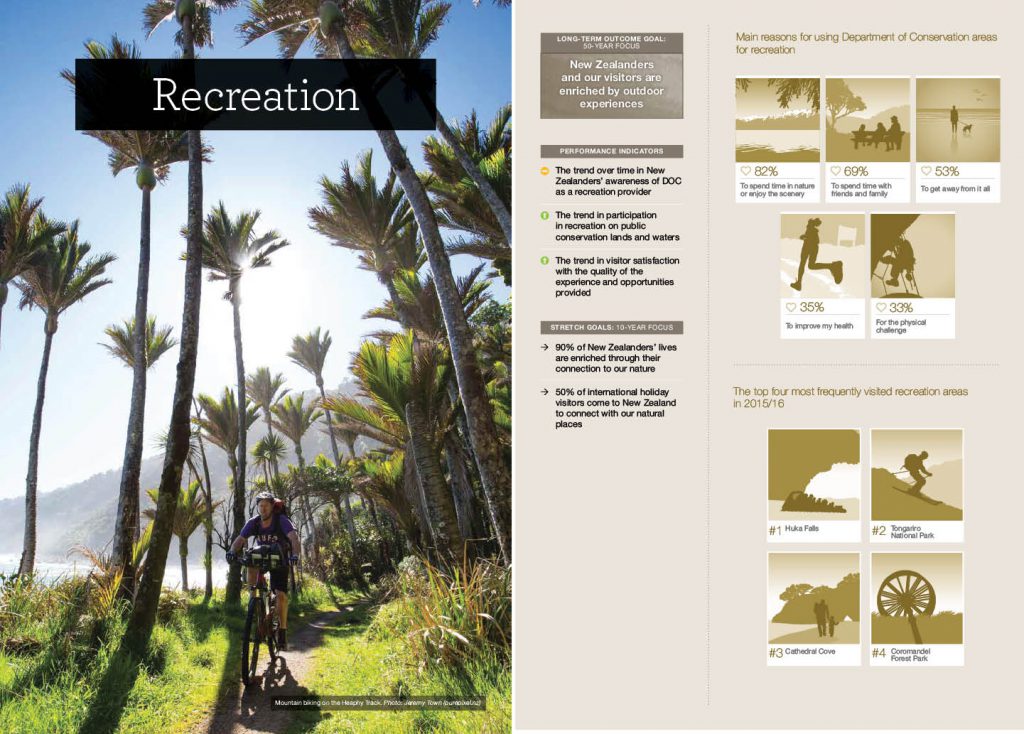 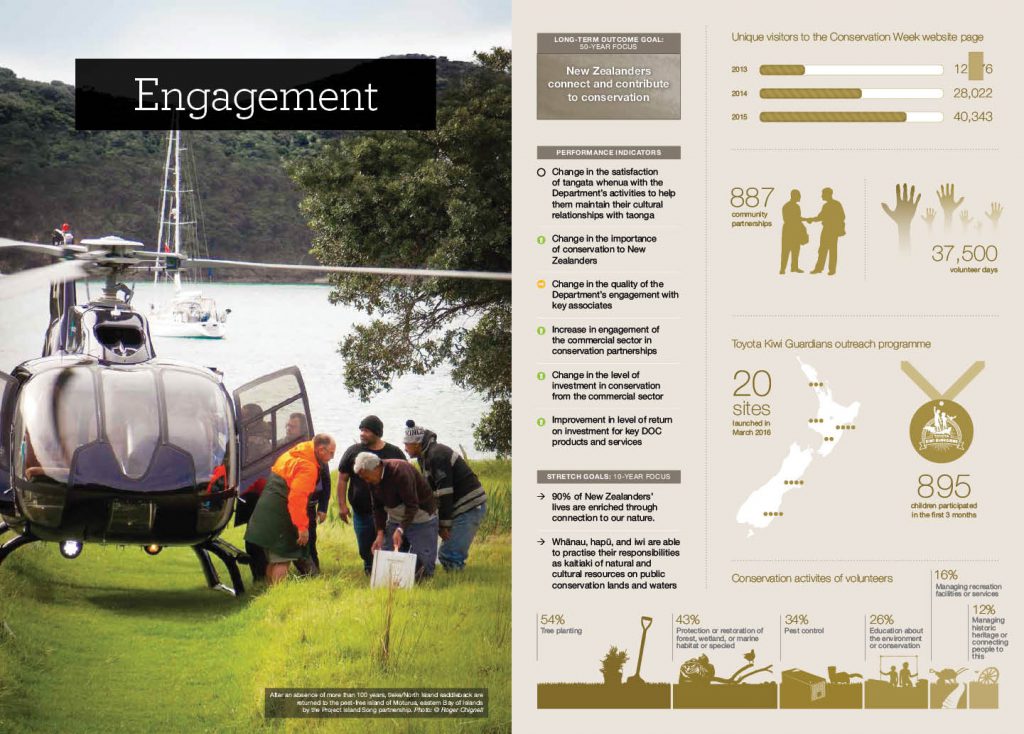 PROTECTING THE FULL RANGE OF ECOSYSTEMS

In their protection work the Department of Conservation strives to ensure that all of New Zealand’s ecosystems have a strong level of protection. This ensures that the biodiversity of New Zealand across the country’s range of distinctive landscapes varying from marine environments to alpine areas is safeguarded. 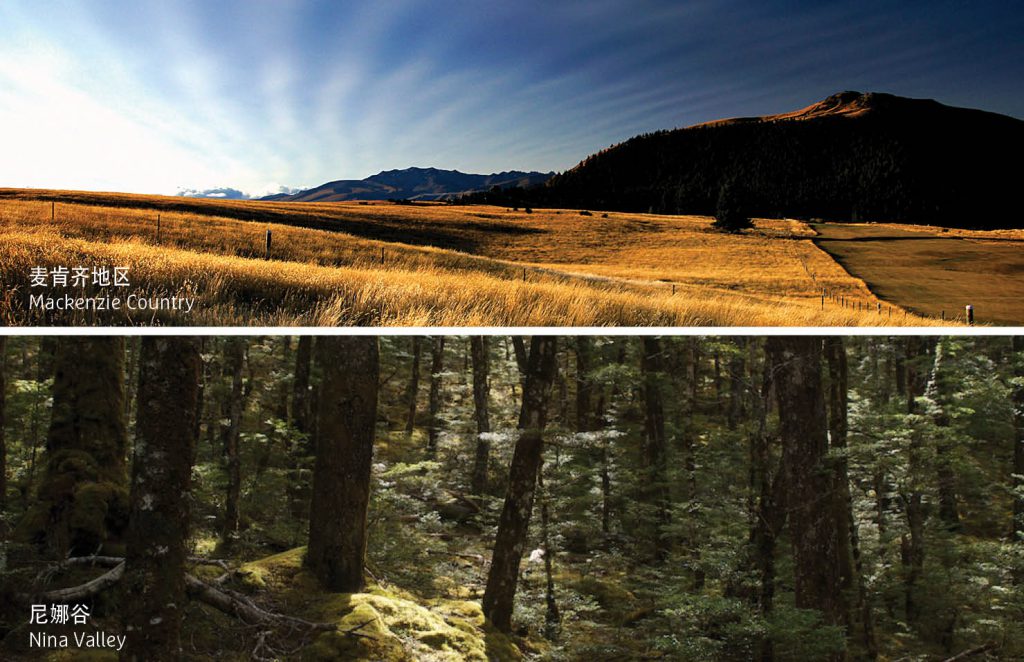 Before the arrival of humans New Zealand’s unique endemic animals and plants flourished. However, the arrival of humans led to the introduction of mammals that are a threat to indigenous flora, avifauna and other animals. This means that the bulk of species the Department of Conservation protects are native plants and birds. These species are not only threatened but are also highly valued culturally.

Since the arrival of mammals introduced to New Zealand by humans, the country’s indigenous wildlife has been under threat from these predators. Animals like possums and stoats kill native birds, usually by attacking nests. The Department of Conservation uses trapping and other methods to reduce the numbers of these invasive predators. 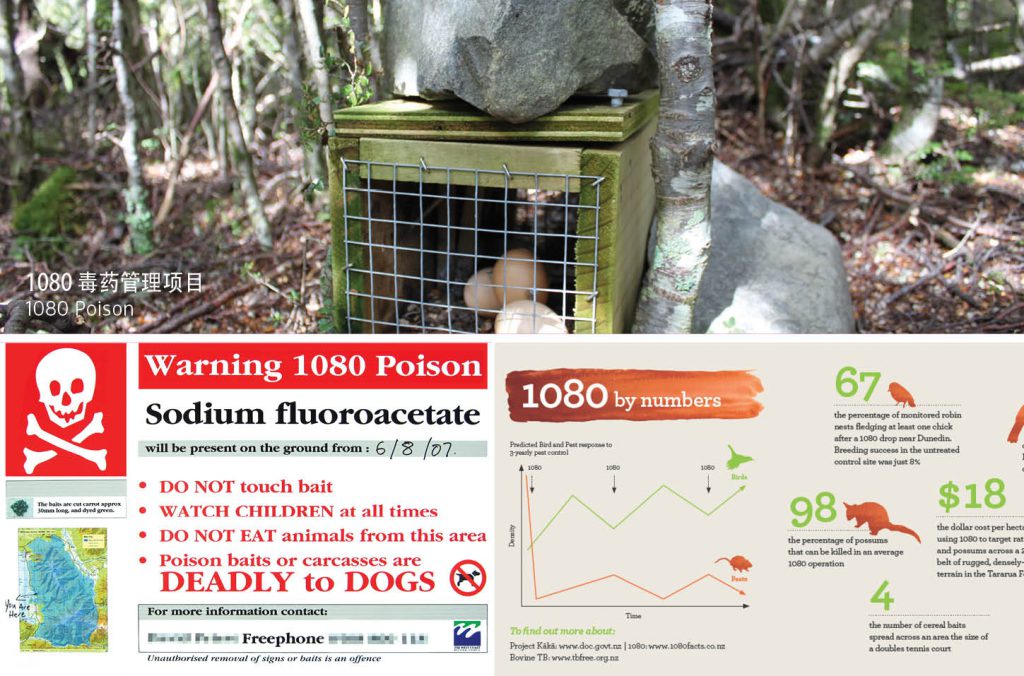 The Department of Conservation cares for threatened native bird species. They do this through various methods including running species recovery programmes. Recovery programs often involve breeding threatened species in captivity to grow their numbers before releasing them back into the wild. 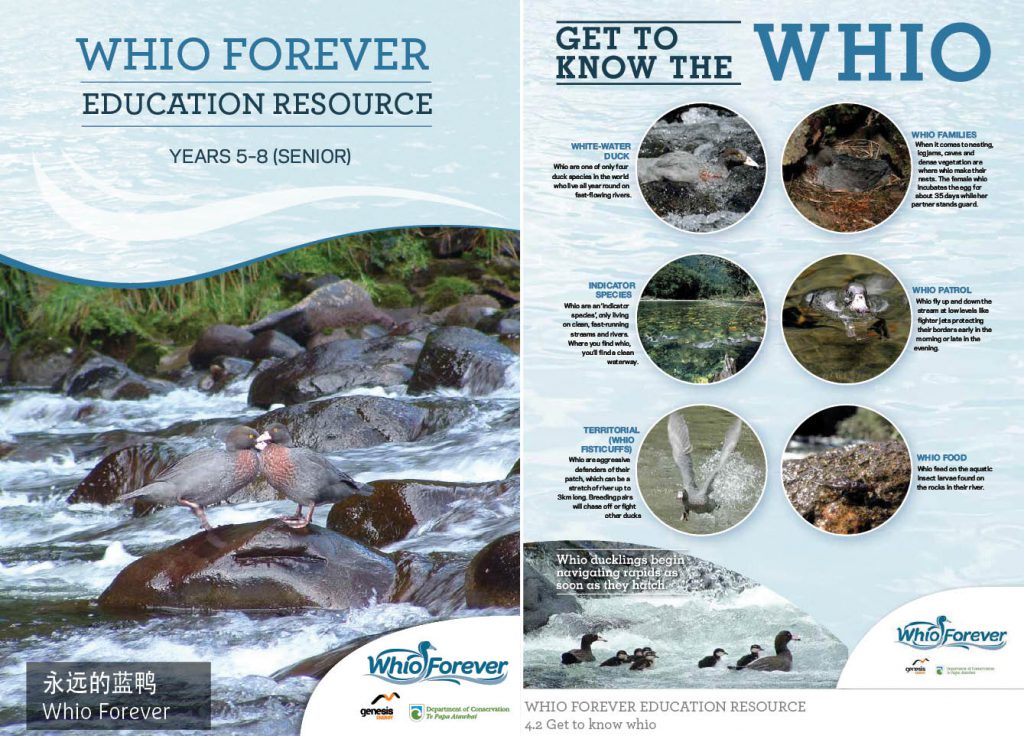 There are 100’s of tracks covering 1000’s of kilometres within New Zealand’s protected areas. The most popular tracks are the nine great walks of New Zealand, which hundreds of thousands of people experience each year. There are a large number of huts located within New Zealand’s protected areas. The huts range from those which are small and basic to others that are much larger and have more facilities. The huts are owned by the government and can be used by the public. MANAGEMENT OF THE VISITOR CENTRE NETWORK 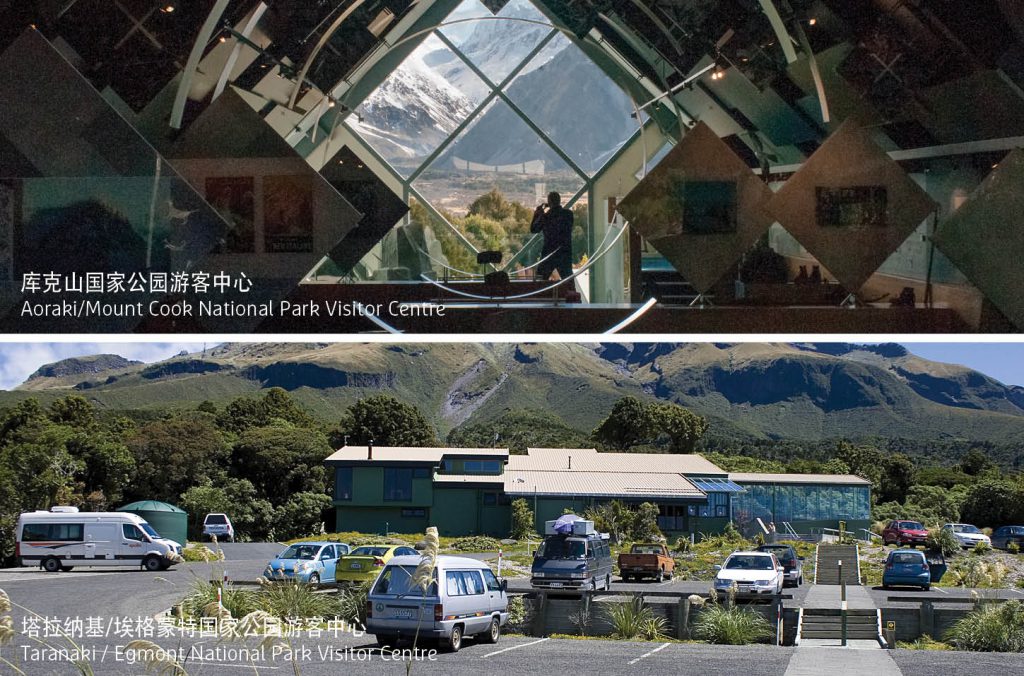 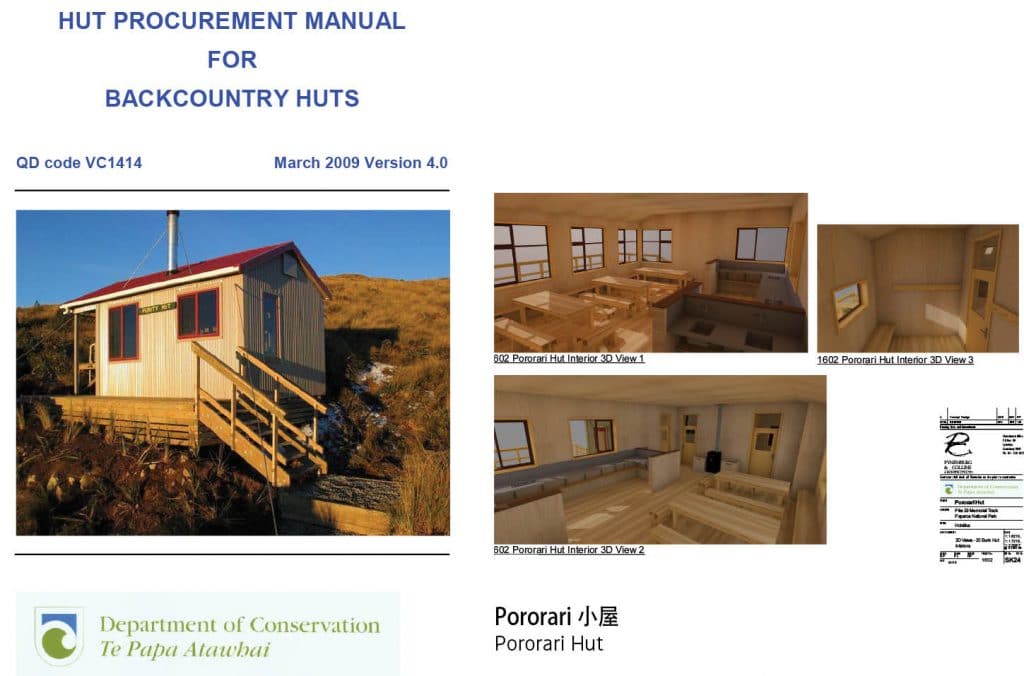 The Department of Conservation works to construct new tracks, huts, and campsites. The organization follows strict guidelines for the construction of these facilities to ensure that they meet government safety standards. The bulk of the Department of Conservation’s operational work is the maintenance and upgrading of existing facilities. Upgrading is also common to ensure that older facilities meet current standards. Walking has always been important in New Zealand, from the routes Maori took across the land to find pounamu, gather food, and meet others, to those European settlers traversed to cross mountain ranges and find resources. Today New Zealand is home to many hundreds of walks that occupy its protected areas, with the nine most stunning hiking routes in the country have been labeled the Great Walks of New Zealand. These walks follow track systems through New Zealand’s national parks, traversing spectacular scenery across mountains, lakes, coastlines, and valleys along the way. The tracks are well maintained and suitable for everyone with a reasonable level of fitness. Day walks to multiday journeys can be undertaken both without assistance and with the help of a guide. The walks are easily accessible from nearby cities or towns and have accommodation available along the routes.

The Department of Conservation protects over 12,000 archeological and historical sites within New Zealand’s protected areas. Heritage places are culturally valued for their historical signifiance and are preserved to ensure that they can be passed on to future generations. 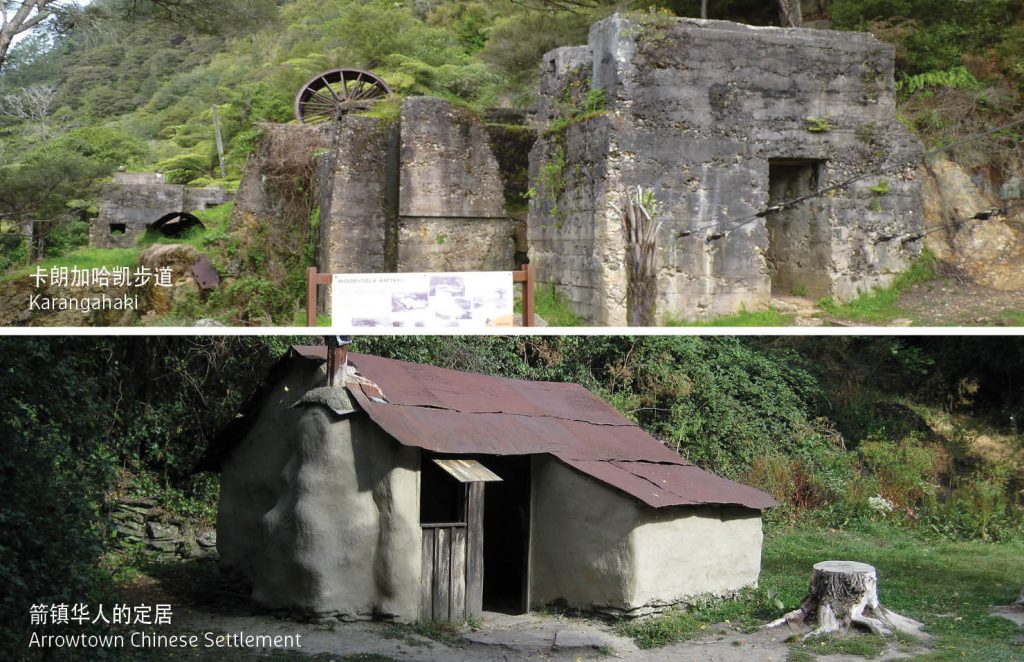 The Department of Conservation promotes the sites of historical heritage they manage to the public. This involves providing people with information about these sites and explaining to them why they are signifiance and why they should visit them. 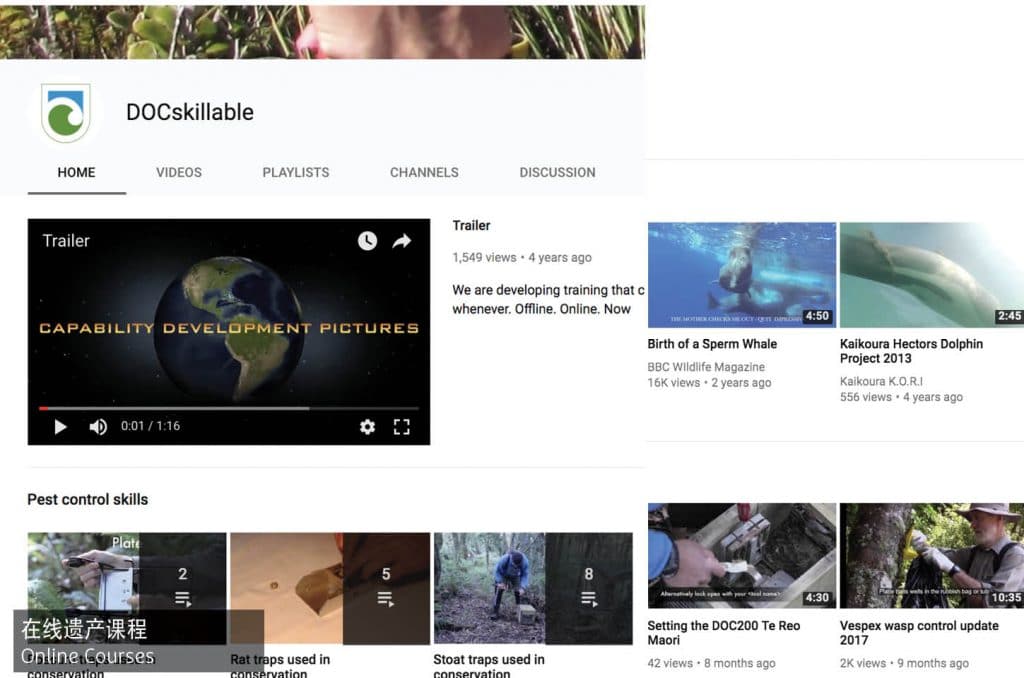 The Department of Conservation seeks to enable people’s involvement in heritage sites. This includes engaging local communities and groups to understand and value their heritage. It also means giving them the tools and knowledge they need to help conserve their heritage. 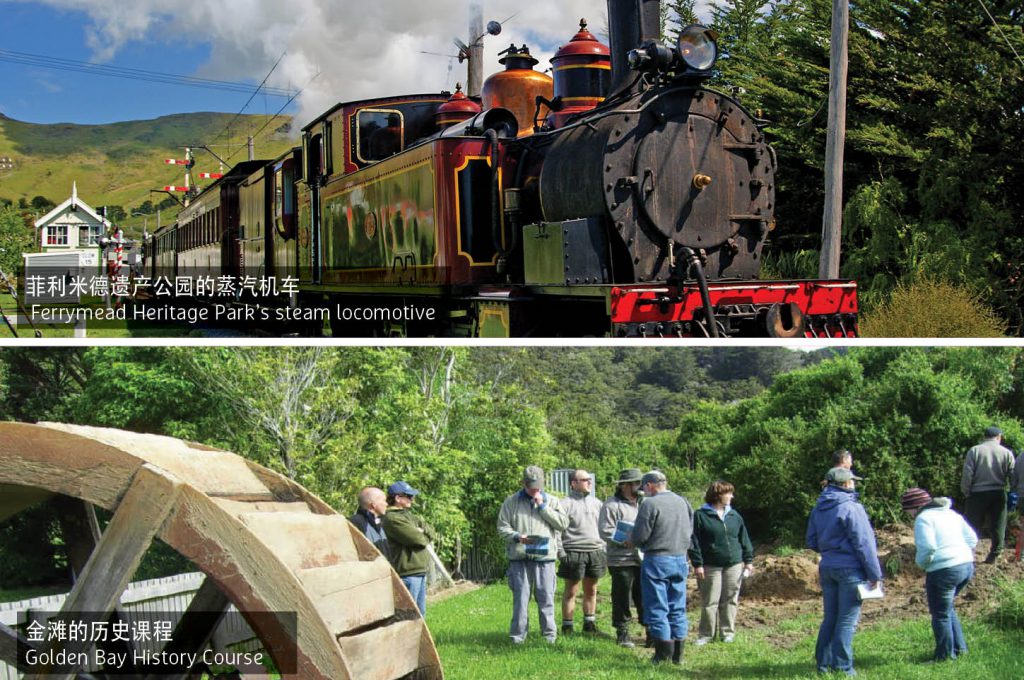 The experience of heritage sites for visitors is important to the Department of Conservation. They seek to make sure that visitors have memorable experiences of these places so they can get a sense of their history and cultural significance. 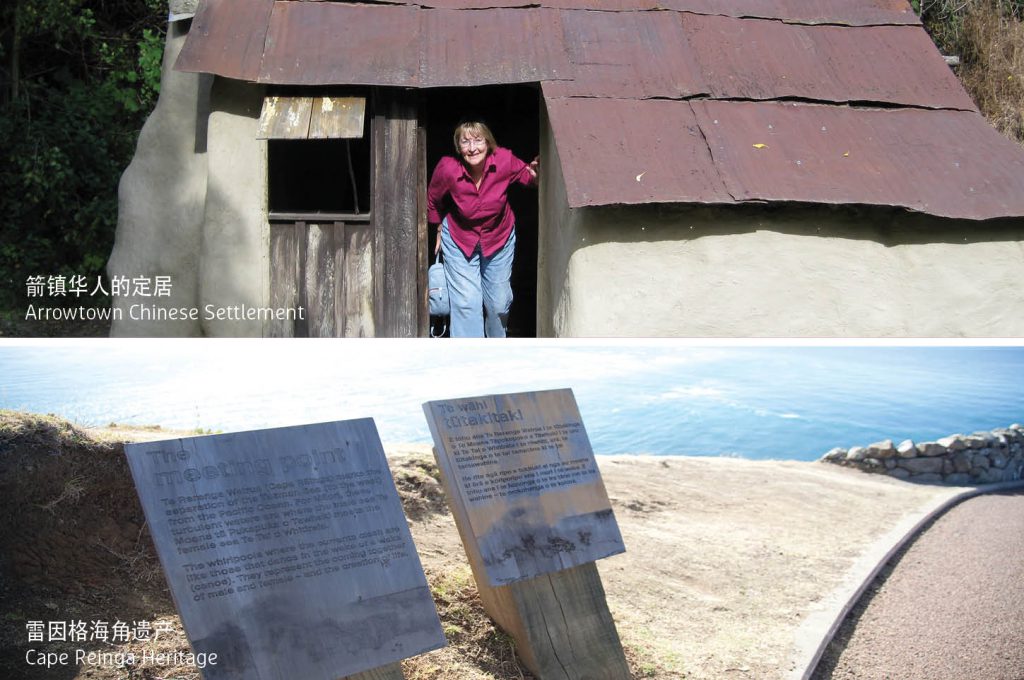 The Department of Conservation works with Maori tribes (iwi) to ensure that their interests in the management of protected areas are met. This means making sure that policy, strategies, and plans reflect Maori worldviews and their identity as people of the land (tangata whenua). Heritage places are culturally valued for their historical significance and are preserved to ensure that they can be passed on to future generations. 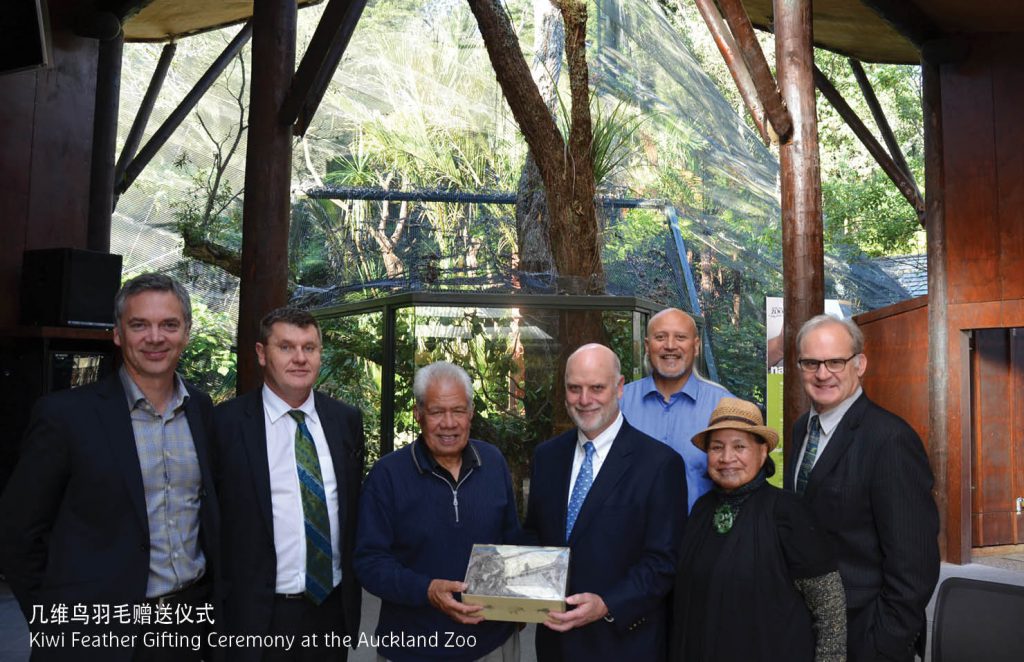 Businesses and corporates play a vital role in conservation by developing their own standards of environmental performance, and through conservation partnerships. In turn, partners get to take part in high profile programs led by world leaders in conservation management.

The Department of Conservation runs several education programmes designed to provide information about protected areas and encourage learning about ecology and important plant and animal species. Many of these programmes are designed for children to stimulate their interest in conservation from a young age. 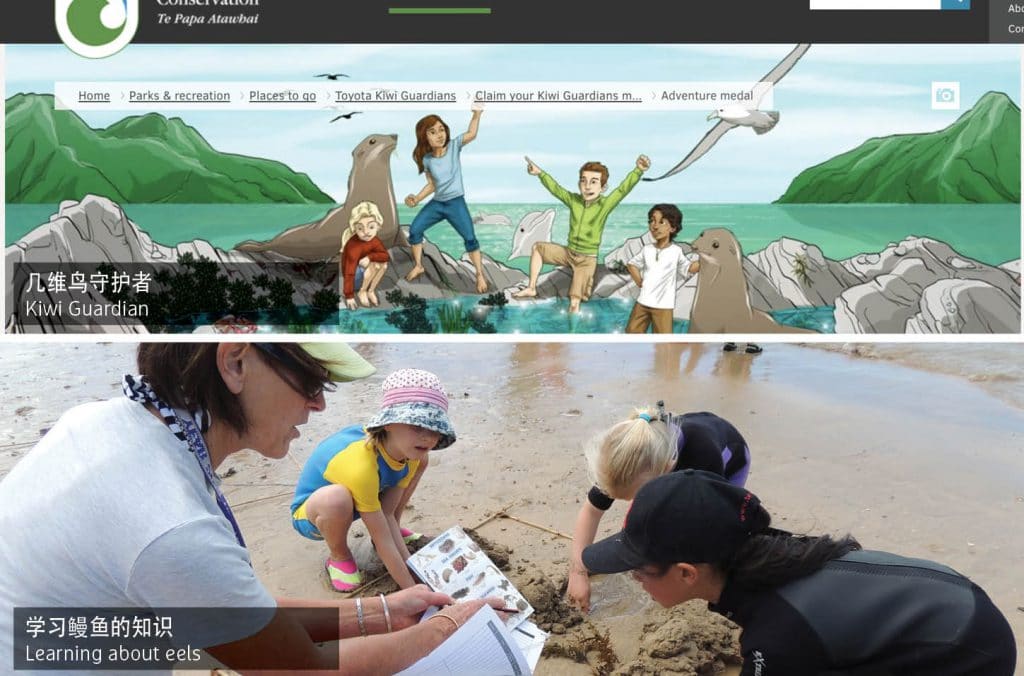 Front line of nature protection in New Zealand. These rangers are responsible for undertaking the day-to-day tasks of maintaining of New Zealand’s national parks. Jobs like trapping that help protect New Zealand’s native birds are some of the most important things they do. The upkeep of recreational facilities such as tracks and huts are also carried out by the rangers.

1000s of volunteers assist the Department of Conservation in carrying out their day-to-day activities within New Zealand’s protected areas. New Zealand’s national parks would not exist without the help of volunteers, who participate in conservation tasks such as trapping pests and removing weeds. The many enthusiastic and motivated conservation volunteers are testament to the importance of protected areas to many New Zealanders. They are passionate about ensuring the survival of the country’s flora and fauna and are driven by cultural values of kaitiaki and guardianship.

While the focus of New Zealand’s nature conservation is often on efforts to protect scenic and ecologically significant landscapes, its marine protected areas are also highly important. New Zealand’s marine protected areas cover large areas off the shores of the country’s main islands. These places are not just blank, static spaces in the sea, but are dynamic marine environments and home to many important species. Far from always being remote and inaccessible, marine protected areas are places the public can visit and enjoy. Visitors have the opportunity to spend time out on the water to get a feel for the marine world, and if they are lucky see in the wild animals such as dolphins and whales. 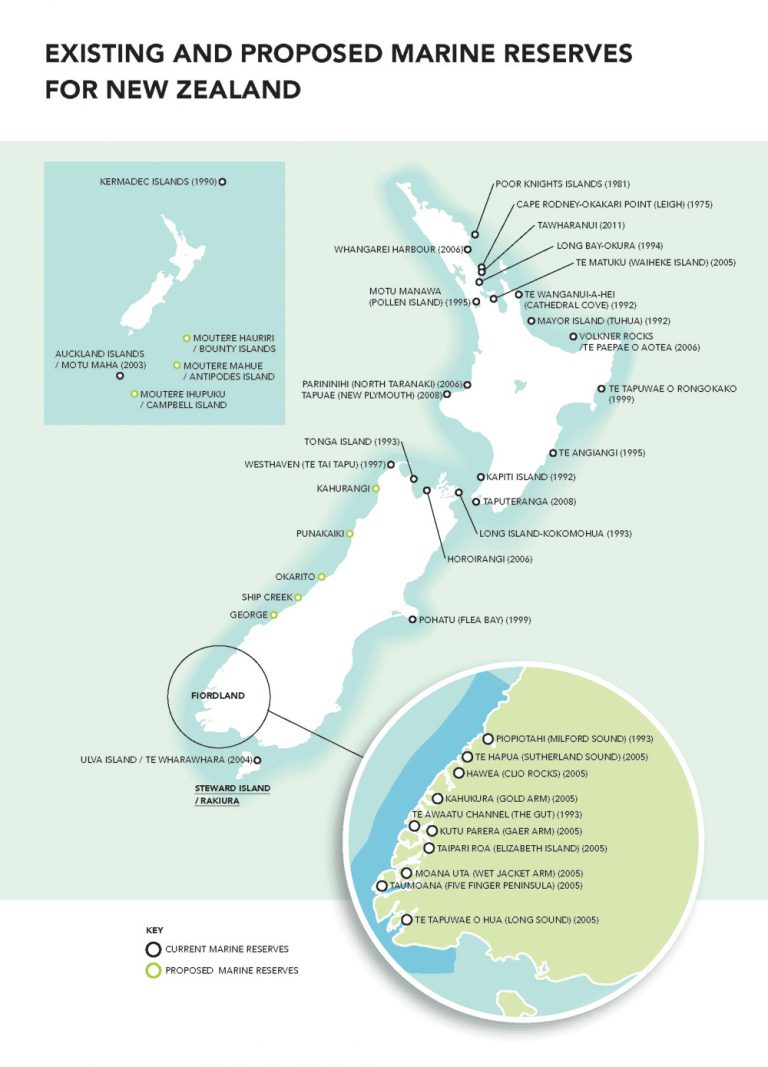